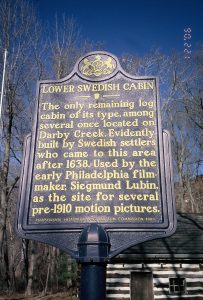 The Lower Swedish Cabin is a historic Swedish-style log cabin located along Darby Creek in Drexel Hill, Pennsylvania. The cabin may be one of the oldest log cabins in the United States.

It was likely built sometime between 1640 and 1650 by Swedish immigrants who were part of the New Sweden colony.

In the early 1900’s, film pioneer Siegmund Lubin filmed several movies at the site. The house served as a private residence until 1937, when it was recorded by the Historic American Buildings Survey and the Cabin became property of the township of Upper Darby. After neglect and vandalism throughout the mid-1900s the cabin was restored in 1987.

The structure was added to the National Register of Historic Places in 1980.